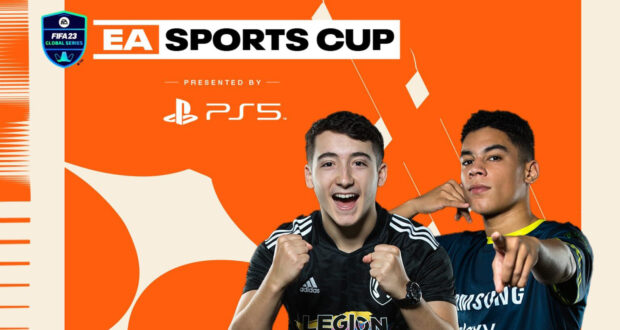 The FIFA 23 Global Series is ready to kick off tomorrow – LIVE from London.

The preliminary round of the new team based tournament EA Sports Cup is here and 20 of the most prominent eSports teams from all around the world will battle starting October 17, 2022 for a prize pool of $250,000. Moreover, the top 2 teams of the tournament will book their tickets to the FIFAe Club World Cup 2023. Therefore, this high stake competition will involve some high-octane football and we are here to break it all down for you.

The new season is heating up 🌡️🥵

Tune in for the #EASPORTSCup 🏆 this Monday, the 17th at 6 PM BST – where the best of the best will compete for the ultimate #FIFA23 glory.

Learn more about #FGS23 and how YOU can compete ⤵️https://t.co/rxYcGS9sV1

EA Sports Cup is a 2v2 OFFLINE tournament contested by 20 teams from all around the world. These 20 teams includes the eSports teams of football clubs like Manchester City (England), RB Leipzig (Germany), Atlanta United (USA), Ajax (Netherlands), and PSG (France). Some of the most popular names in the eSports world like Fnatic, Guild, Complexity and Ninjas in Pyjamas are also competing at the event.

These 20 teams are divided into 4 groups of 5 teams each as shown below:

#EASPORTSCup and the road to the FIFAe Club World Cup 🛣️

Tune in on October 17th at 6 PM BST via Twitch or YouTube for the EA SPORTS Cup 🏆 pic.twitter.com/6VYXJ43DPa

The group stages  – which will span over 8 weeks – will be in a double round robin format. All teams will have to face the other four teams twice in their respective group. The top two teams from each Groups will advance to the Knockouts and Championship – which is scheduled to be held in January 2023. The top two teams from the Knockouts and Championship phase will advance to the FIFAe Club World Cup 2023. The grand finale of the EA Sports Cup will be held on 21st January 2023.

What can the viewers expect?

Similar to last season, we may get engagement rewards for watching any major live FIFA eSports events. EA Sports has recently released the new FGS Swaps tab in the FIFA 23 Ultimate Team SBC section – coinciding with the timing of the beginning of the EA Sports Cup.

If your Twitch and EA Accounts are linked, you will be rewarded with FGS Swap tokens for watching EA Sports Cup for at least one hour. These tokens can be exchanged in game for a number of untradeable packs that will help you bolster your team.

How to watch EA Sports Cup?

The group stages of EA SPORTS Cup is live every Monday starting October 17th until December 5th at 18:00 UK Time. As always, you can catch the action on EA SPORTS FIFA esports YouTube Channel or EASPORTSFIFA Twitch channel.

🚨 Tomorrow is the day!

The players are getting ready to battle it out on a Whole. New. Level.#EASPORTSCup #FGS23 #FIFA23 pic.twitter.com/gPWoCXGHMu

Stay tuned for more updates on this competition in the following weeks.