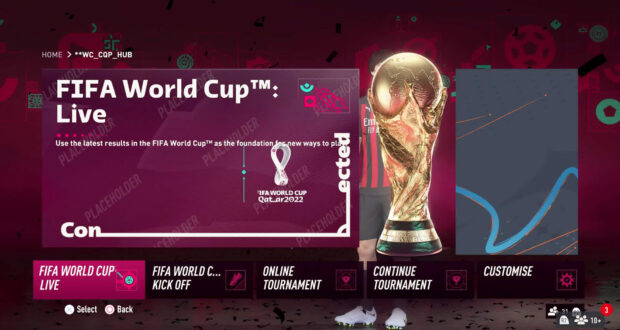 It has been barely 2 weeks since FIFA 23 was released but we have already seen a plethora of mistakes from EA Sports. From crashing the Heroes market and covering it up to mixing up contents of reward packs and using Napoli’s badge on the UEFA Marquee Matchups SBC among others, EA is on another streak of mistakes.

Now, we can add another one to this ever growing list, the most catastrophic of them all to this date. EA accidentally unlocked access to the FIFA World Cup Mode for some FIFA 23 players on PlayStation 5. This mode is supposed to be released as a DLC next month around the time of beginning of the FIFA World Cup in Qatar on November 20, 2022. Prior to this, the only information we got about this mode was the inclusion of the Word Cup FUT Heroes in collaboration with Marvel.

How to access FIFA 23 World Cup Mode on PS5 ✅🫡 pic.twitter.com/A0yRf9WXCr

Players could access the offline World Cup mode and play the whole tournament. Others even managed to play the online tournament!

However, the error has now been patched by EA and players can’t access the mode anymore. Thanks to this early leak we already know that the mode will feature 48 national teams.

48 National Teams will be avaliable to play in FIFA World Cup. #FIFA23 Will have ONLINE and OFFLINE modes. pic.twitter.com/4NmAUVc0Eg

The exact release date of the FIFA World Cup mode DLC has not yet been revealed. With FIFA 23 being the last ever iteration in the FIFA series, we could expect EA to go all guns blazings with the World Cup mode.