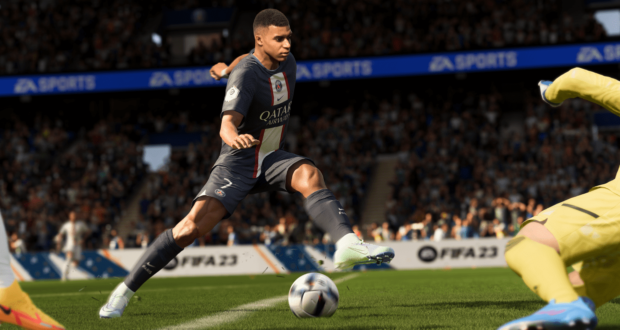 AcceleRATE in FIFA 23 – Everything You Need To Know

FIFA 23 is still in it’s infancy period as players are still figuring out the META of the game. During the teasing phase of FIFA 23, EA Sports released a patch note that revealed something that would change the way we played FIFA before. In this post, we will discuss in detail about the newest feature in the FIFA franchise – AcceleRATE.

In the last few FIFAs,  using a slow, strong and tall player like Harry Kane or Erling Haaland in your team gave you a huge disadvantage. These players were world class talents, however, their real world football genius could not be translated well into FIFA. The META of FIFA 21, for example, involved using fast and agile players.

However, in FIFA 23, that is no longer the case. The AcceleRATE feature made sure that players like Harry Kane are finally viable in a competitive environment.

All players in the game are divided into three different categories on the basis of their AcceleRATE archetype:

Players with this AcceleRATE archetype will have a quick start to their run and can cover short distances extremely fast. However, their acceleration rate slows down over time. Players who are short and highly agile falls under this archetype.

Players with this AcceleRATE archetype will be slow to start. However, they will eventually catchup and will excel over longer distances. Players who are tall and strong falls under this archetype.

All other players that do not fall into either of the above categories fall under this archetype. These players have a linear acceleration.

In short, while Explosive players can get an explosive head start, Lengthy players will reach their top speed before everyone else.

AcceleRATE is coming to #FIFA23!

Moreover, the strength attribute is more relevant than ever before. This, along with the fact that Lengthy players attain top speed before anyone else implies that using tall and strong players is a highly effective strategy in FIFA 23.

The introduction of AcceleRATE is a welcome change in the landscape of FIFA. While players like Robert Lewandowski, Karim Benzema and Erling Haaland were used mostly as SBC fodders in previous FIFAs, they are some of the most highly sought after gold cards in FIFA 23. Even the chemistry styles market has seen a huge change due to the AcceleRATE archetypes. In previous FIFAs, Shadows and Hunters were nearly extinct in the market due to their high demand. However, in FIFA 23, everyone prefer Architect to Shadow or Hunter, due to the former providing a +15 boost to strength.

Unless EA nerf the Lengthy archetype, we might finally see a FIFA where world class players will be more desirable to the player base than some lower rated gold cards with high pace and agility.