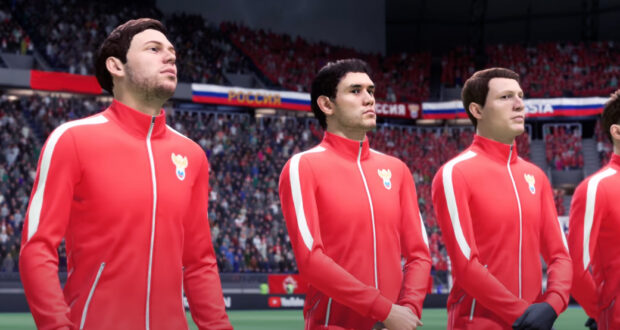 The games publisher has announced that all Russian clubs and the national team present in FIFA 22 will be removed due to the recent conflict in Ukraine.

Days after FIFA and UEFA banned all the Russian clubs and national team from their competitions following the invasion of Ukraine, EA Sports confirmed the removal of all Russian teams from FIFA 22, FIFA Mobile and FIFA Online. Here’s the full statement:

“EA Sports stands in solidarity with the Ukrainian people and like so many voices across the world of football, calls for peace and an end to the invasion of Ukraine.”

“In line with our partners at FIFA and UEFA, EA Sports has initiated processes to remove the Russian national team and all Russian clubs from EA Sports FIFA products including: FIFA 22, FIFA Mobile and FIFA Online.

“We’re also actively evaluating related changes to other areas of our game.

“We will keep our communities up to date on any action taken, and thank players for their patience as we work through these updates.”

There are currently three Russian clubs available to play with in FIFA 22, CSKA Moscow, Spartak Moscow, Lokomotiv Moscow plus the Russia National Team.

EA confirm they will soon remove all Russian teams and the Russian national team from #FIFA22 ❌ pic.twitter.com/7iNEFXlyGX

The three clubs rosters include a total of 91 players featuring the likes of Mário Fernandes, Quincy Promes or Igor Akinfeev that will get removed unless they transfer to other clubs available in-game.

Moreover, FUT players are concerned that Russian Icon Lev Yashin could also get removed from the game but EA is yet to make a statement regarding this matter.

Electronic Arts has also applied the same ban on its NHL ice hockey franchise. For more updates please follow us on twitter!

ea sports fifa 22 russia 2022-03-03
Damien
Previous: FIFA 22: Everything You Need To Know About The Silver Stars Series Promo
Next: EA Bans Sales of FIFA 22 and FIFA Points in Russia and Belarus