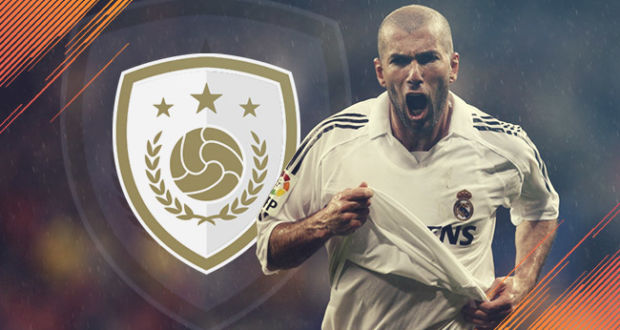 Top FIFA 18 Ultimate Team Icons That Need To Be Added

Now celebrating its ninth birthday, FIFA Ultimate Team kicked off its legends section with a fantastic showcase of iconic players from across the years. The FIFA Ultimate Team Icons range selected 39 greats of the game and released three versions of each player. With different ratings on each of the three cards per player, there’s been a great range of top-quality cards to vie for in the most popular football game in the world. However, while the Icons range does include the likes of Ronaldo Nazario, Maradona, Thierry Henry, Pele, Peter Schmeichel, and Rio Ferdinand, many feel that there were some major misses from the ultimate set of cards. So, here are the top players that we think should have been included in the Icons range.

Winner of the Ballon d’Or in 2003 – beating Thierry Henry and Paolo Maldini to the coveted prize – Pavel Nedved is one of the greatest players not included in the FIFA 18 Icons series. For the Czech Republic, which had split from Slovakia in 1993, Nedved became a hero and carried his national team deep into major tournaments. His play helped the Czech Republic climb to the 1996 Euros final and to the semifinals of the 2004 Euros, during which he captained his nation.

Nedved was also a major factor in his country reaching the World Cup in 2006, which was the first time since Czechoslovakia split. Nedved was a very versatile player but was favoured on the left side of midfield. His incredible ball control and pace saw the Czech winger fly past the opposition, and he had an eye for goal – scoring 18 for the Czech Republic in 91 games and 110 through 501 domestic career games. The ex-Lazio and Juventus talisman was not included in the FIFA Ultimate Team Icons range this year but his incredible achievements did earn him a Legends card in myClub on PES 18. 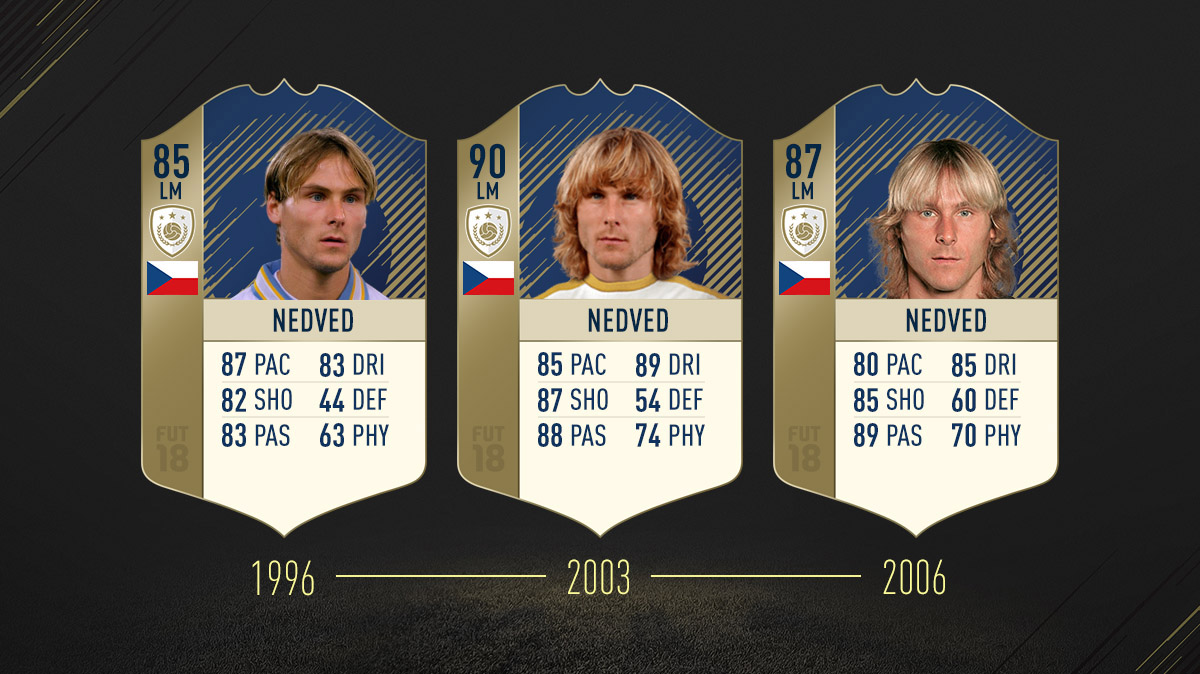 How about not having an Icons series for a three-time Ballon d’Or winner? Johan Cruyff won the coveted prize in 1971, 1973, and 1974, marking an era of dominance on the pitch for the Dutch legend. Most impressively, his haul of Ballon d’Or awards came across two different clubs, Ajax, and Barcelona. With Cruyff leading the charge, the Netherlands became an almighty force in world football, with the team progressing to the final of the 1974 World Cup.

But it wasn’t just on the pitch where the late Johan Cruyff showed off his incredible football mind. The Dutchman managed Ajax for three years before he followed in the footsteps of his playing career and moved to Barcelona. For eight years, Cruyff managed the Spanish giants, and also managed the national team of Catalonia. Pep Guardiola, currently hailed as one of the best managers in the world, told The Guardian that he wouldn’t be where he is now without the teachings of Cruyff.

This has given rise to Cruyff becoming a global icon, heralded as one of the greatest footballers of all time. Not only does myClub on PES 18 feature a mighty Cruyff card but other games also feature the superstar. The online game Shoot features many of the best players from the glory days of football, with Johan Cruyff placed alongside Diego Maradona and Pele – which is exactly where the Dutchman deserves to be. In FUT’s Icons range, Maradona and Pele got the nod, but Cruyff did not, to the disappointment of many football fans. He is likely the biggest omission from the Icons range. 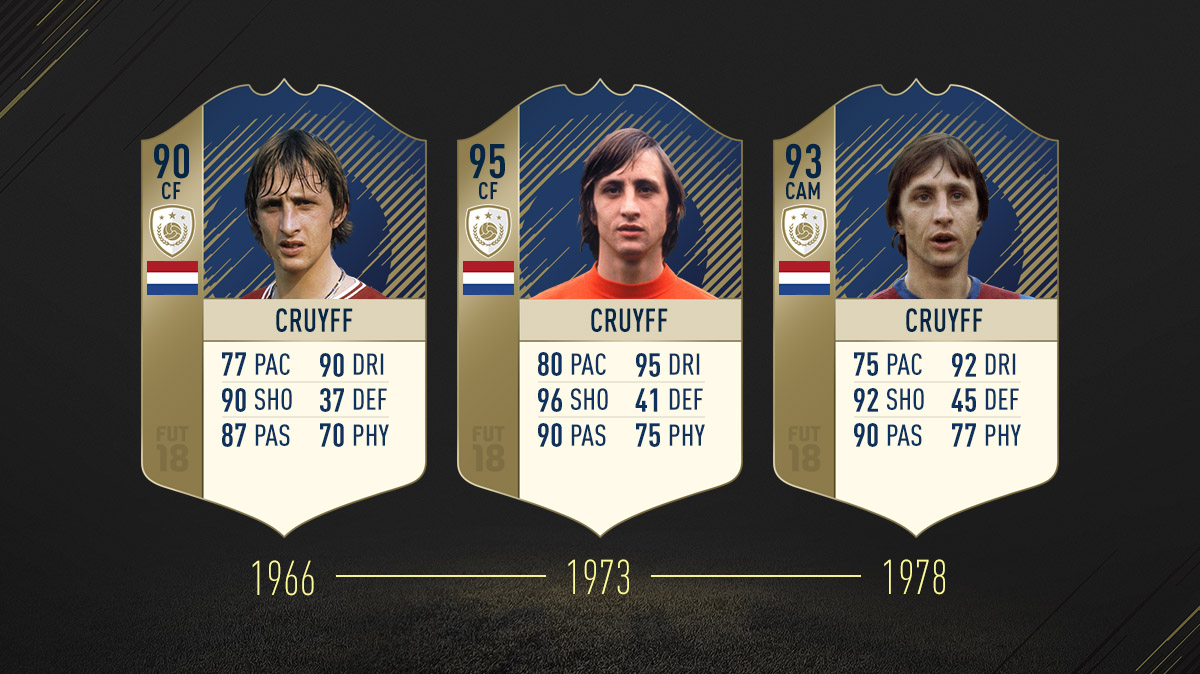 One of only eight players to ever win the Ballon d’Or, Champions League, and World Cup, Zinedine Zidane is undoubtedly an all-time great. Given that his incredible performances on the pitch have been followed by a spectacular showing as the Real Madrid manager, the Frenchman has etched his name into football history among the best to have ever played. Zidane earned global acclaim during his time with Juventus, where he played for five years before Real Madrid shattered the world record transfer fee in 2001 to draw him to the Bernabeu. With 31 goals in 108 games, Zidane was part of the golden generation from France that won the 1998 World Cup in their home country.

Of course, one of Zidane’s actions that made headlines around the world was his 2006 World Cup final headbutt on Marco Materazzi. The rationale that Zidane gave for his actions helped to keep him favour among the football fans of the world, and the headbutt even transcended into pop culture, with The Zinedine Zidane Headbutt Game proving to be very popular online. 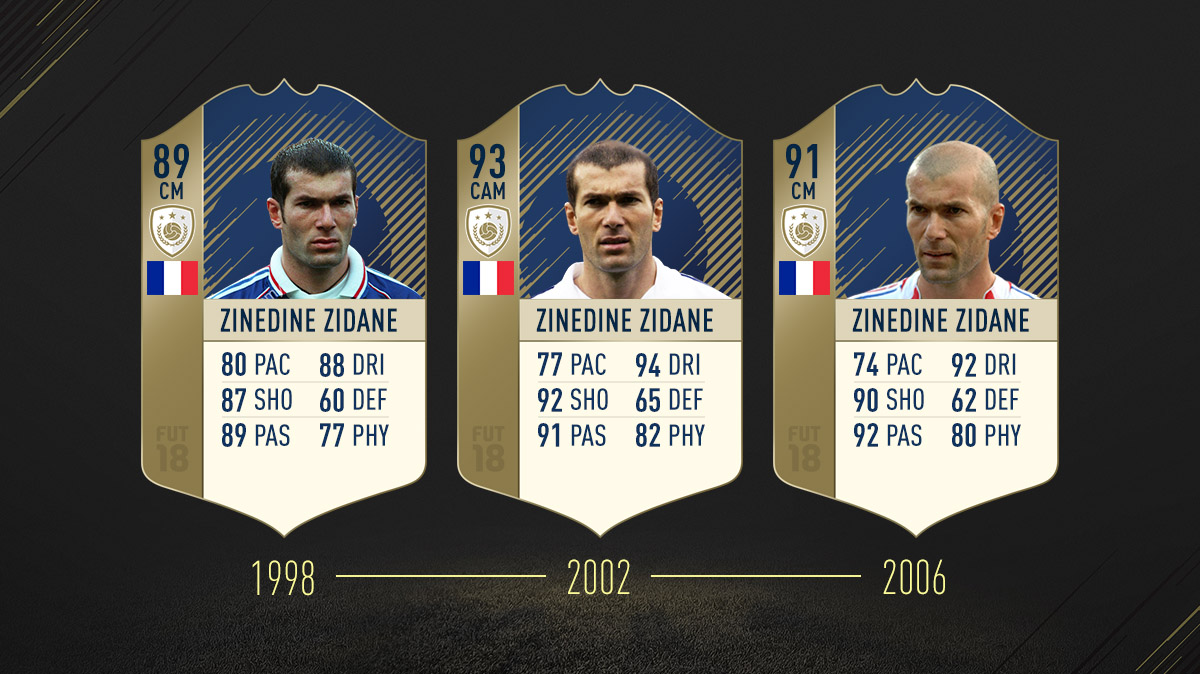 The range of FIFA Ultimate Team Icons has been met very well by FIFA 18 players all over the world. EA Sports selected some almighty players from years gone by, and input a good spread of nationalities in the series. However, you can’t help but feel that a few other players deserved a place in such an iconic collection. Perhaps next year, for FUT’s ten-year anniversary, there’ll be a larger collection of legendary players in the game.