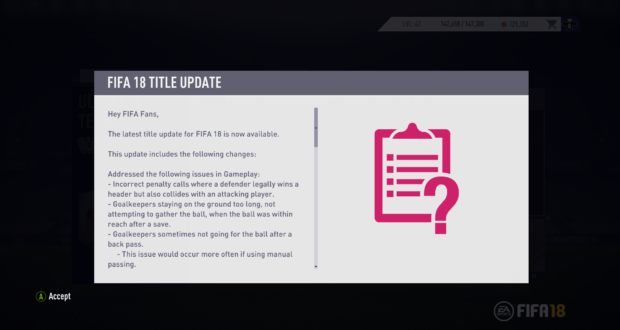 A new update for FIFA 18 is now available on PC with PS4 and Xbox One to get it later this week. Below you can find the changelog of this update:

Addressed the following issues in Gameplay:
– Incorrect penalty calls where a defender legally wins a header but also collides with an attacking player.
– Goalkeepers staying on the ground too long, not attempting to gather the ball, when the ball was within reach after a save.
– Goalkeepers sometimes not going for the ball after a back pass.
– This issue would occur more often if using manual passing.

Addressed the following issues in FIFA Ultimate team:
– Players getting a message that there are no attempts remaining in the current Daily Knockout Tournament when their final attempt is still active.
– The game freezing when quickly selecting an opponent in Squad Battles immediately after getting to the Opponent Selection screen.
– Corrected some of the text for the squad requirements in FUT Champions.
– A visual issue with an incorrect overall player rating showing in the Player Performance screen of the Pause Menu in certain situations.

Addressed the following issues in Online Modes:
– Players being unable to make quick subs if they had used all their available pauses.
– The trophy not being presented in the Pro Clubs Championship celebration.
– Captains disconnecting from Pro Clubs matches when Voice Chat is disabled via game launcher.

Addressed the following issues in Career Mode:
– Players signed to pre-contracts, in the first season, not coming to your team if the first summer transfer window was disabled during your Career Mode setup.
– Some player attributes were missing from the Squad HUB.

-The tournament tree in the Women’s International Cup being empty after the semifinals.

Addressed the following issues in Audio / Visual / Presentation:
– Repetitive whistling that was heard in some stadiums.
– Some visual issues with the Bundesliga broadcast package.
– Updates to a number of crests and kits.