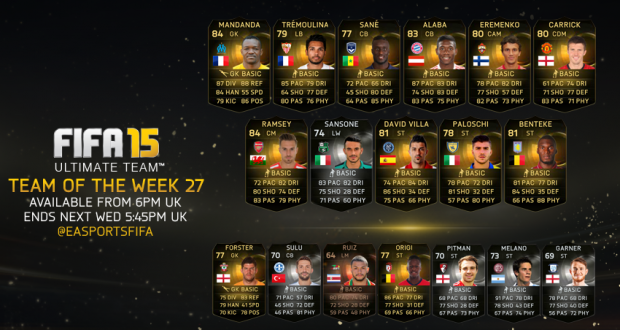 On Thursday afternoon EA Sports performed a maintenance of 3 hours for FIFA Ultimate Team and EASFC across all platforms that added the next improvements:

The most important update from the list is by far the removal of the club names from the Transfer Market. The reason behind this action is to stop once and for all the coin selling/buying business because with the removal of the club names it will be very difficult for the coin sellers to send coins to their buyers. Another major update that has been confirmed and gone unnoticed is the 75 match per day limit in Ultimate Team which practically kills the match coin glitch farmers. These updates in addition with last week’s implementation of Price Ranges feature will more than likely make the coin selling industry go extinct in the near future.

Moreover there are constant adjustments to the item prices and this week there were no more than three updates made with price adjustments for each platform! For the complete list of price ajustments please click here.

There are many great IN-Forms in this week’s TOTW but Alaba’s card as CB is insane:

These in-form players will be available in packs from 18th March 6:00PM – 5:30PM 25th March. You can view the team more detailed at FUTHead or FUTWiz.

Tevez and Hart got their much deserved MOTM cards in FUT 15 thanks to their midweek performances in UEFA Champions League:

Here are the most interesting FIFA 15 related articles and guides that we could find on the web this week:

– Son racks up $4500 in FIFA microtransactions, father pays the price

– Lessons from Diego Simeone: a guide to scoring more and conceding less

And here is the newest compilation of best FIFA 15 goals from EA Sports:

Remember that you can submit your own goals for the official Best Goals of the Week compilation here.

That’s the news for this week guys! Thanks for checking!