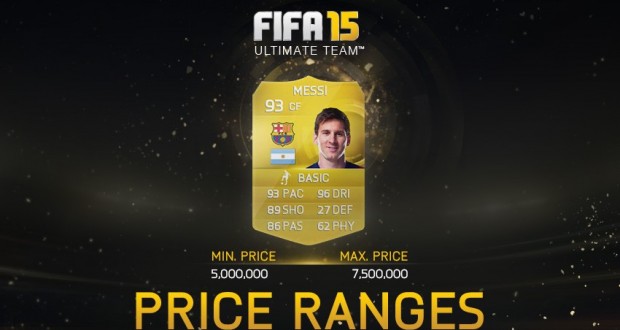 The fourth title update for Xbox One, PS4 and PC and the third update for Xbox 360 and PS3 have been released earlier this week bringing new content to FIFA 15 and addressing many issues such as:

– Added the MLS expansion teams Orlando City and New York City FC to the “Rest of the World” league for Kick-Off and Online Matches.
– Stability improvements to EASFC Match Day Challenges, Pro Clubs, and Online Seasons.
– Fixed stability issue around requesting a substitution in Player Career.
– Addressed issue where some players were not able to unlock certain boot packs for their Virtual Pro.
– Names of scouted players in Career Mode are now more reflective of their country of origin.
– Stability improvements to Friendly Seasons in FIFA Ultimate Team Seasons.
– Improved ‘Compare Price’ functionality in FIFA Ultimate Team when comparing prices for consumables.

Although the new FUT item Price Ranges will differ from current prices, their relative value to other player items on the Transfer Market will remain consistent in order to maintain a level playing field for everyone.

Here are some more important notes about Price Ranges:

Once this feature has been activated, all FUT items (players, in-forms, consumables, and club items) in FIFA Ultimate Team will have a Price Range that sets the highest and lowest Coin prices that each item can be sold on the Transfer Market.

If you still didn’t fully understood what this feature is about please check out the next FAQ:

What are Price Ranges?
A Price Range is the set min and max price an item in FUT can be sold for on the Transfer Market.

How come Price Ranges are universal across Xbox, PS and PC?
We felt that this was the fairest method of introducing this feature.

When will Price Ranges be turned on?
We will announce when Price Ranges have been activated on each console on Twitter today (Monday, March 9).

How can I check what a player’s price range is?
When you select a player to list on the Transfer Market, his Price Range will appear on the screen. Your player’s minimum and maximum Buy It Now prices will also set to the Price Range by default.

My IF Messi was worth X million, but now it’s only worth X million coins?!
Although the new Price Ranges differ from previous prices, their relative value to other player items on the Transfer Market will remain consistent to one another.

Will you ever adjust Price Ranges for X player?
The Price Range for certain players may be adjusted in the future as we work to improve this feature over time.

What about new in-forms? What will their price range be?
New ‘in-form’ FUT player items will be given a Price Range upon release

Also a first batch of price range adjustments was released yesterday and you can check it out right here. Price Adjustments will continue to occur as the market changes and different items are introduced.

The vampire Luis Suárez is leading TOTW 26 together with David Luiz and Solomon Rondon:

These in-form players will be available in packs from 11th March 6:00PM – 5:30PM 18th March. You can view the team in the Web App or more detailed at FUTHead or FUTWiz.

Moreover, you can participate in the Green Team Challenge for some extra coins. All the player items from the Green Team will be available in packs until Match 18th! The ratings of these special green cards are the same as their default cards!

Cristiano Ronaldo, Thiago Silva, Kevin De Bruyne, Jerome Boateng, Gonzalo Higuain and Yacine Brahimi are now available in Ultimate Team as MOTM thanks to their performances in the Champions and Europa League matches:

For the best FIFA 15 articles and guides of the week section we have mainly gathered articles regarding the implementation of Price Ranges feature in FUT:

– EA SPORTS FIFA 15 Tips: 10 Career Mode Signings You Might Not Know About

– Will FUT Ever Find Its Range?

– Is It the End of FIFA Ultimate Team?

– FUT Price Ranges – The Most Drastic Update To Ultimate Team Ever?

– Here’s why EA have just killed the game in the most Soviet way possible.

There’s a new FIFA 15 Ultimate Team Player Tournament video out on YouTube with Vfl Wolfsburg this time lining up 8 players to compete for the trophy. Among those players we can find the one and only Lord, Nicklas Bendtner:

Thanks for checking out this week’s news! Please let us know what’s your opinion on the FUT Price Ranges feature in the comment box down bellow.