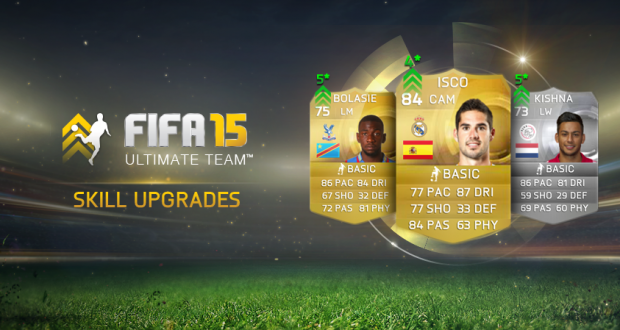 The Winter Upgrades have finally arrived in Ultimate Team 15 with no more than 134 upgraded players! To view the complete list of upgrades you can either click on the images bellow or visit this page. To understand how these upgrades were applied please read the following FAQ:

Beside the Winter Upgrades, EA Sports have also released for the first time in the history of Ultimate Team, Skill Upgrades! The Skill Upgrades will apply to all versions of the players: in your Club, in-forms, new players in packs, etc. Complete list of upgrades can be seen here.

These in-form players will be available in packs from 18th February 6:00PM – 5:30PM 25th February. You can view the team in the Web App or more detailed at FUTHead or FUTWiz.

Romelu Lukaku got his orange MOTM card in FUT 15 this week thanks to his hattrick against BSC Young Boys in Europa League:

Former England captain and World Cup winner Bobby Moore got his Legend card released in packs yesterday featuring some impressive stats for a center back:

Piszczek, Gundogan, Baines and Peterson are the latest real life players to get their Pro Player card in FUT 15:

To celebrate the Chinese New Year, EA Sports have added the Lunar New Year Tournament in Ultimate Team with the next requirements and rewards:

Our web research for the best FIFA 15 articles and guides of the week has stopped at the next links:

EA Sports have released another video tutorial and this time they will show you how to score or save penalties in FIFA 15:

With the web app disabled in order to shutdown the market autobuyers, EA Sports are now pointing their guns at those who promote coin selling services and firsts to go down are, of course, the youtubers. Yesterday night FIFA producer @DarthEsso confirmed that a wave of bans have been approved against those who advertise these kind of services and popular FIFA youtubers like Fangs, Nick28T and NepentheZ got their accounts banned. Do you think EA did the right thing by banning the youtubers for coin-promotion? Leave your thoughts in the comment section.

That’s it with the news for this week guys. Thanks for checking them out!