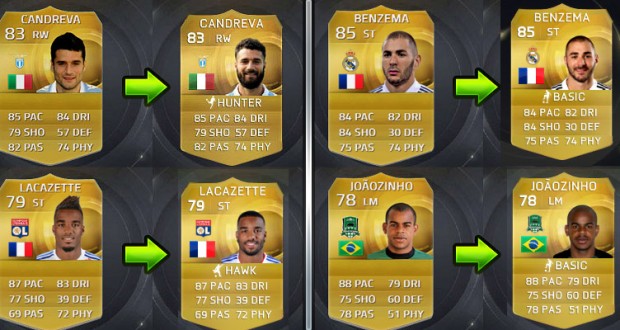 The third FIFA 15 title update is on its way and we have some extra details on what it may contain! Some of you may have noticed that the photo assets (minifaces) of some players have been updated on the FUT web app and the mobile companion app. The new photo assets aren’t available on the consoles or PC, meaning that they will be added through the next title update which will be released in the near future. The update may also include new scanned faces for the 14/15 Premier League promoted teams Burnley, Leicester City and QPR! We know that thanks to this fantasy premier league clip from Premier League’s official facebook page where we can clearly see the scanned face of Burnley’s striker Danny Ings. The arrival of a new patch has been confirmed by the EA support in a conversation that I had with one of their game advisors a few weeks ago:

The EASFC catalogue has been updated earlier this morning with new loan players! The new players that you can unlock and add them for a limited number of matches in your squad are:

Be sure to redeem them as soon as you can because EA Sports might update the catalogue with new players again in a few months.

The 10th TOTW has arrived in FUT 15 led by the lord himself, Nicklas Bendtner:

These in-form players will be available in pack from 19th November 6:00PM – 5:30PM 26th November. You can view the team in the Web App  or more detailed at FUTHead or FUTWiz.

Tonight is ” Derby della Madonnina ” with AC Milan and Inter Milano confronting each other for the 213th time in their history and with this occasion is fair enough to see a FUT tournament dedicated to it:

EA Sports are releasing a series of video tutorials on FIFA 15 and today we have the first video on how to score free kicks:

Great collection of FIFA 15 related articles and guides this week, be sure to check each and one of them, they are worth it:

– Sir Chesney Sells Himself to Manchester Utd on FIFA 15

– 5 Reasons Why EA Should Include Female Players in FIFA

– Briand: ‘My celebration was inspired by FIFA 15’

– Eden Hazard is better at FIFA 15 than you

By far the best official GOTW compilation from EA with some sick goals from Depay and Bale:

That ends our weekly news post lads, hope you liked it! We’ll see you next week. Cheers!