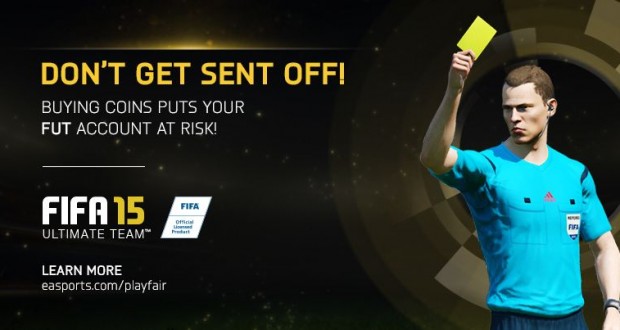 The first official FIFA 15 patch update that was released on the PC platform last week is now live on Xbox One and PS4 consoles. In case you missed last week’s news post we will list again the content of the patch:

Beside the FIFA 15 next gen update, the FIFA 15 Ultimate Team mobile game also got an update released with the next improvements included:

You can download the FUT 15 mobile game for free from iTunes, Google Play or WP Store.

Before the launch of FIFA 15, EA Sports published an open letter to all FUT 15 players regarding the coin harvesting/selling/buying topic and they made it clear that these kind of actions will not be tolerated anymore and serious measures will be taken against those who generate coins using third-party softwares, sell coins for own profit, buy coins and advertise coin sellers. This week they’ve posted an update on their website about their recent coin selling wipeout and you can read it down bellow:

Since the launch of FIFA 15, we’ve been able to identify and ban thousands of coin selling accounts. We’ve also issued warnings to coin buyers and promoters that were in violation of the EA Terms of Service (TOS). After sending initial warning emails to coin buyers and promoters, we have identified those that remain in violation of the TOS and since issued FUT Club wipes (with FIFA Points returned) – the most recent wave of FUT Club wipes happened earlier this week.

Details of our three-step ban process can be reviewed in the article below.

We’d like to thank community members that made reports to [email protected]. Using the information you provided we were able to investigate and identify many in-game accounts promoting coin selling.

Thanks,
The FIFA Team

As you can see EA Sports are really trying to kill off this coin selling business and make the game a better place for honest players. They also reset the FUT 15 accounts of many popular FIFA youtubers for advertising coin sellers, so that gives you a better picture of how serious they are.

*The original TOTW #5 featured Tal Ben Haim as an IN-Form player but was later replaced with John O’Shea.*

These in-form players will be available in pack from 15th October 6:00PM – 5:30PM 22nd October. You can view the team in the Web App  or more detailed at FUTHead or FUTWiz.

If you wanna earn some coins this weekend be sure to play in these newly opened Ultimate Team 15 tournaments:

As of this week, the legend Jay-Jay Okocha is available in packs on Xbox One and Xbox 360! EA Sports will gradually release the new 15 FUT Legends in packs throughout the season. The old 42 FUT 14 Legends are already available in packs!

The best FIFA 15 articles and guides of this week:

– What a D**k! The Most Annoying FIFA Players

The official Goals Of The Week #2 & #3 compilations are up on YouTube so be prepared for some mind blowing goals:


Reus, Sahin, Gundogan and Amini took part in Borussia Dortmund’s FUT 15 Player Tournament this week where the four players had to play against each other in order to determine the best FIFA 15 player among them. Who won the tournament? Find out in the next video:

Hope you enjoyed reading this week’s news. See you next week fans!