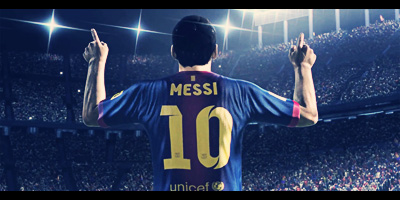 FIFA 14 Next Gen has been officially announced and revealed today together with the new Xbox One console! Check out all the details and other FIFA 14 news down bellow:

The Next Gen FIFA has been revealed to the world thanks to the Xbox One console reveal venue today. Madden NFL 25, FIFA 14, NBA LIVE 14,and EA SPORTS UFC will run on the new EA Sports engine called IGNITE and will incorporate run-time physics, player intelligence, animation, locomotion and online systems. Bellow you can view the presentation trailer of the new engine with exclusive footage from EA Sports Next Gen games including FIFA 14:

The Intelligence system of the EA SPORTS IGNITE engine delivers four times as many calculations per second than previously possible. This new feature contains human-like intelligence, contextual awareness and instincts. Players will think and analyze the action, anticipating and reacting to what’s occurring around them.

With ten times greater animation fidelity driving the new locomotion system, EA SPORTS IGNITE recreates dynamic movements and real-world biomechanics. True athleticism is now possible, with players able to accelerate, plant, pivot and cut with the agility and explosiveness of professional athletes.
The atmospheres will not only look real, but they will feel real. EA SPORTS IGNITE delivers environments that are alive with stunning visual accuracy, as ever-changing as real-world stadiums that evolve throughout a match. For the first time, 3D crowds and dynamic sidelines have emotions and intelligence, reacting to how the match unfolds. No two plays and no two games will ever be the same.
The EA SPORTS IGNITE engine will power FIFA 14, Madden NFL 25, EA SPORTS UFC and NBA LIVE 14 on the Xbox One and PlayStation®4. For more information please visits EA Sports IGNITE official website!

There are still no confirmations if FIFA 14 Next Gen will be available on PC or not, we have to wait until E3 to find out! On the other hand EA Sports did confirmed that FIFA 14 NG together with Madden NFL 25, EASports UFC and NBA Live 14 are being developed for release within next 12 months! The current gen FIFA 14 will be released on PC, Xbox 360 and PS3 this late September/early October while the next gen version dates are yet to be announced. FIFA 14 NG will most probably be released when the new Xbox One and PS4 consoles come out because FIFA is a console launch title!

From the trailers above we can clearly see that Camp Nou will return in FIFA 14 and that Atletico Madrid players got new scanned faces!

With the reveal of their new gaming console Xbox One, Microsoft took time and signed an agreement with EA Sports for an Ultimate Team 14 exclusive content as you can see in the tweet bellow:

Pay attention! This doesn’t mean FUT14 will be exclusive to Xbox One! Microsoft’s new gaming console will only have some extra special FUT14 content that other consoles won’t have!
EA has officially decided to end the Online Pass system! The news was confirmed by EA senior director of corporate communications John Reseburg who said:
“Yes, we’re discontinuing Online Pass.
“None of our new EA titles will include that feature.”
“Initially launched as an effort to package a full menu of online content and services, many players didn’t respond to the format,”

“We’ve listened to the feedback and decided to do away with it moving forward.”

So no more Online Pass in FIFA 14!
Source: FSB
It’s now confirmed that FIFA 14 won’t be produced for Wii-U due to the poor incomes from FIFA 13 on Wii-U! An EA Spokesperson confirmed this news with the following words:
“Ten months ago FIFA 13 was a launch title on Wii U…”
“Although the game featured FIFA’s award-winning HD gameplay and innovative new ways to play, the commercial results were disappointing. We have decided not to develop FIFA 14 on Wii U.”

Source: FSB
Two more new leagues are set to appear in FIFA 14! The Hong Kong First Divison and the Luxembourg National Division will feature in FIFA 14 according to the french FIFA commentator, Hervé Mathoux! During an interview about his job for EA Sports he slipped a few details on the two new leagues:
“We recorded almost all the names of players, we made thousands. In France, it is all the players in Ligue 1, including the reserve and sometimes with updates, as in the signing of Zlatan Ibrahimovic to PSG. It makes all the players in Ligue 2, we also made the players championship Luxembourg, Hong Kong.”