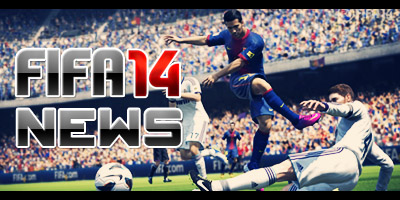 This week’s FIFA 14 News are served:

A release date for FIFA 14 has been revealed thanks to Amazon which is September 24th for North America. From the same source we know that PS Vita was added as a platform release for FIFA 14 and we also know that Ultima has listings for PS2 and PSP versions of FIFA 14. The only console that has small chances to get FIFA 14 released is Wii-U because of last year’s poor income from FIFA 13 Wii-U version!

The Turkish League is on its way to FIFA 14 according to the next message from the Turkish Union of Clubs marketing department when a fan emailed them about the league’s appearance in FIFA 14:
“We are at the contract signing stage with EA Games. Deal will be done in few days. Our league will definitely be included in the game.”
Let’s just hope that last year’s story won’t repeat when UEFA re-opened the corruption case of the Turkish League and EA had to delay the Spor Toto Super Lig comeback for this year.

More new faces are being unveiled in FIFA Online 3! Demba Ba, Vertonghen, Jovetic, Arbeloa and Gundogan got their own custom made faces:

K-League also got the kit update for the 13/14 season in FIFA Online 3:

All of these kits and faces will be available in FIFA 14!
Here we have some nice FIFA 14 related articles:
– FIFA 14 Producer Discusses How The New Sprinting Feature Will Change The Game (Gameranx)
– FIFA 14: 5 Classic Forgotten Features We’d Love To See Return (WhatCulture)
– Women will not be included in FIFA 14 (FGN)
– Luis Suarez’s Bite & Other Funky Features FIFA 14 Needs (eXplosion)
And here we have what it seems to be the leaked FIFA 14 official cover featuring Messi in the 13/14 Barca home kit. There is no confirmation yet if this is the official cover but it seems quite legit:

So what do you think? Is this the leaked FIFA 14 official cover or just a well made cover by a fan?
Don’t forget to follow us on: