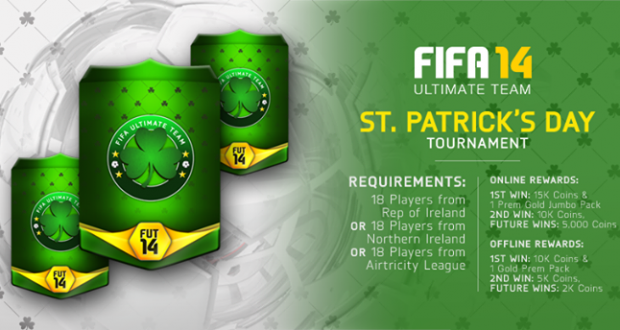 Some of you might have experienced difficulties these days while trying to connect to FIFA Ultimate Team on PS3, PS4, PC, and mobile devices. EA Sports reassured that they are working on fixing this problem:

” FIFA Ultimate Team on PS3, PS4, PC, and mobile devices (iOS / Android / Amazon / Win8) is currently experiencing issues that may prevent players from logging in and connecting to online services. Our team is working on this issue to restore FUT online services as soon as possible. “

The FIFA dev team is also working on fixing the Ultimate Team market search crash and a fix for it will be made very soon!

The 3rd batch of Winter Transfers are now live in packs in FUT 14! You can view the complete transfers list here.

Lavezzi, Huntelaar and DROGBA are destroying defences in the new Team of the Week!

These IN-Form players will be available in packs from 12th March 6:00PM – 5:30PM 19th March. You can view this team in the Web App or more detailed at FUTHead.

This weekend FUT 14 will host the Saint Patrick’s Day Tournament! The requirements and the prizes for this tournament are listed bellow:

Rep of Ireland/Northern Ireland/Airtricity League hybrids are not allowed to compete!

Dutch legend, Frank Rijkaard is in the FUT Legend Spotlight this week! Best chance to find him in packs all year.

The last news of this post regards the PlayLikeALegend competition which reached its final round! The four finalists have been announced and now you can vote which one of them scored the best goal in this competition. The winner will take home two Legend items, an Xbox One, EA SPORTS™ FIFA 14, 1 million FUT coins and an exclusive Legend Shirt. Also the three runners up will each receive a Legend item and EA SPORTS™ FIFA 14.