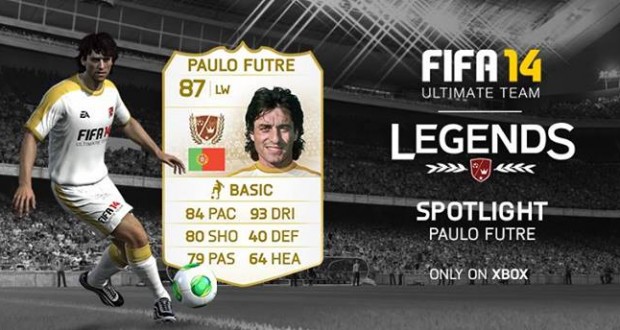 There’s a new version of the EASFC App available for all mobile users! The version 1.9.75 adds the next features:

If you can’t login to the app on your iOS device after the update please try one of the following:
• Quit the app (by double-tapping the Home button and swiping the Companion App up) and re-open it.
• Delete the app and re-install it.

The EASFC App can be downloaded for free on iOS, Android and Windows Phone devices.

The 2nd and last batch of Winter Upgrades is now live on FUT 14! The complete list of upgrades can be viewed here.

Sammir Nasri is the first player to get the Man Of The Match card in FUT 14 thanks to his performance in the Football League Cup final against Southampton!

You can view the card stats here.

Futre takes the FUT Legend Spotlight! This week is the best chance to find him all year.

FUT Legends are available only on Xbox One and Xbox 360 consoles!

Speaking about FUT Legends, the last challenge of the PlayLikeALegend competition is available for entries! This week’s challenge is called Prolific Control and you need to submit an in-game clip showing your skills in the game. Remember that this is your last chance to compete in the final phase of this competition where you can win 2 Legend cards, an Xbox One, a FIFA 14, 1 million coins and more! Bellow you can view the famous youtuber Mhjerpseth showing you what you need to do in order to win this challenge and with it a place in the final.

The competition is available only for Xbox One users from UK, Spain, Germany and France!

TOTW 25 IN-forms are out and available in packs!

These IN-Form players will be available in packs from 5th March 6:00PM – 5:30PM 12th March. You can view this team in the Web App or more detailed at FUTHead.

Learn more about Custom Tactics for FIFA 14 in this episode of The Boot Room:

Bellow you can find the best FIFA 14 articles and guides of the week from the web:

And the last thing we have for you is the official Goals Of The Week #20 compilation from EA Sports:

That’s the FIFA 14 news for this week!