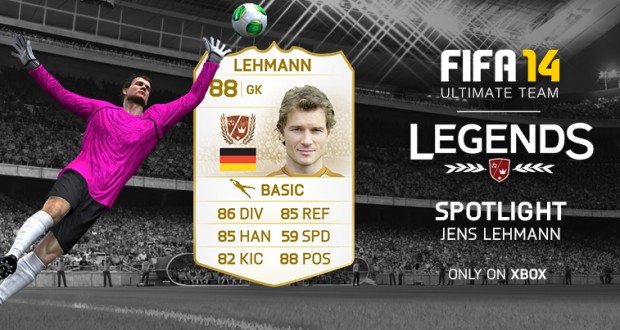 There’s a new title update available for FIFA 14 on PS4. The update addresses the following:

Xbox One users will get the update later this weekend.

EA published the TOP 10 most transferred defenders and goalkeepers in Ultimate Team 14 and you can check the lists down bellow:

#10 Kévin Constant (Guinea) – AC Milan (Serie A)While Constant doesn’t stand out with his Skills, his physical abilities make him a strong defender. With 87 Stamina, 84 Sprint Speed, 82 Acceleration and 82 Strength, those who use the flanks will benefit from this leftback’s athleticism and stability.

#9 Martín Cáceres (Uruguay) – Juventus (Serie A)The 26-year old Uruguayan defender is a solid choice for the backline. His 92 Jumping allows him to get the leg up on other players in the air and with 84 Marking, Sliding and Standing Tackles and 83 Interceptions, Cáceres is an absolute wall on the backline.

Boateng fits the mold of the dependable defender. His 86 Strength and 82 Aggression supplement his 83 Sliding and 81 Standing Tackles. Strikers going one-on-one against Boetang will struggle to keep the ball against him.

Having 92 Shot Power is impressive enough for a defender, but that’s not all Kaboul can bring to a club. His 86 Strength, 84 Aggression and 81 Jumping make him a great player to have on the backline to clear the ball and commence a counterattack. And if he gets close to goal, he can let one rip.

The popular Real Madrid defender’s 92 Aggression, 85 Interceptions and 83 Strength complement his 92 Sliding Tackle and 86 Standing Tackle quite well. Good luck keeping the ball on his side of the pitch.

Gibbs is an excellent choice for those looking for a speedy leftback, His 84 Sprint Speed and 83 Acceleration can be deadly on the counterattack. And if your club has a strong striker ready in the box, have Gibbs and his 80 Crossing set you up for a goal.

Arsenal’s Koscielny is an aerial threat with 81 Heading and 90 Jumping. But with his 83 Marking, 82 Sliding Tackle and 86 Standing Tackle, he can also cause problems for attackers looking to get into the box on the ground.

The Italian Ogbonna is an excellent defensive choice. His 85 Strength, 84 Marking, 81 Sliding Tackle and 84 Standing tackle, means that strikers will have to take long shots to have any chance of getting a ball on net.

Don’t let the 78-rating of Abate fool you. He is one of the fastest defenders in Italy, with 91 Acceleration, 94 Sprint Speed and 94 Stamina. Those who love to play the wings can take great advantage of what this fleet-footed defender has to offer.

FC Schalke 04’s Felipe Santana is the most popular defender thanks in large part to his 90 Heading Accuracy. Combined with his 80 Jumping, this Brazilian is great at clearing crosses out of the box or heading the ball into the back of the net.

#10. Diego López Rodríguez (Spain) – Real Madrid (La Liga)Every club needs a strong goalkeeper, but having two is quite the luxury. Real Madrid is one of the few clubs in the world with two dependent goalkeepers on their squad. While legendary Iker Casillas has been plagued with injuries for most of 2013, Diego López has taken over the role admirably. His 86 Handling, 83 Positioning and 81 Diving have made him a favorite among FIFA Ultimate Team users.

#9. David de Gea Quintana (Spain) – Manchester United (Barclays Premier League)United’s David de Gea has accomplished quite a lot at only 23 years of age. After helping the Red Devils win the Premier League title last season, he is poised to become Spain’s top goalkeeper. With 88 Reflexes and 86s in Diving and Kicking, he’ll be vital if Spain hopes to defend their FIFA World Cup title.

Many football fans don’t pay much attention to Brazilian goalkeepers, but Diego Alves is the exception to that rule. His 90s in Diving and Reflexes are the highest ratings in those two categories among all the goalkeepers on this list, evidence of how he can help slow down a high-tempo offense.

City’s Joe Hart is one of the most popular goalkeepers in the world and continues to be the first choice for most Ultimate Team users. His 87 Reflexes, 85 Diving and 81 Positioning combined with his 6ft 5in (196 cm) stature helps to intimidate oncoming attackers, making it difficult to get the ball past him without some trickery.

While most will point to fantastic coaching, one of the main factors for Chelsea’s success over the last decade can be attributed to dependability of the 85-rated Petr Čech. The Czech international has been one most reliable players for the London-side and among the more popular players in the world at any position. His 85s in Diving and Reflexes, 83 in Positioning and 82 in Handling help him stand strong in goal.

A quick reactionary goalkeeper is someone you want between the posts and PSG’s Salvatore Sirigu is one of the best. The Italian’s 87 Reflexes, 86 Diving and 85 Positioning help him get in the right spots to make key saves in goal.

German fans have always been lucky when it comes to having quality goalkeepers lead their clubs and René Adler is an example of that strength. The Hamburger SV goalkeeper is sought after in Ultimate Team because of his 86 Diving and Reflexes, as well as 83 Positioning and 81 Handling.

On this list, Borussia Dortmund’s Roman Weidenfeller is the oldest player of the bunch. But when it’s all about attributes, age doesn’t matter. Although he has a 60 Kicking, Weidenfeller’s 86 Positioning, 85 Reflexes, 84 Handling and 83 Diving more than make up the difference. It also helps that he plays for one of the best clubs in the world and is part of the deep German National Team pool of goalkeepers.

Courtois’ strong performances between the sticks was a big part of Belgium’s outstanding World Cup qualifying run. Atlético de Madrid’s Thibaut Courtois is a beast in goal in large part due to his 88 Handling. While he too suffers with a low Kicking (he comes in at 69), his 86 Reflexes, 84 Positioning and 82 Diving masks that deficiency.

The most popular goalkeeper is another Belgium international. Mignolet is sought after because of his ratings, which include 83 Reflexes, 81 Diving and 81 Handling but also thanks to his fine real-world play for Liverpool this season. He made waves earlier this year with some key saves, and has started in all of their league matches up to this point.

This week’s FUT Legend Spotlight is Jens Lehmann! When a FUT Legends is in Spotlight it means that this week you will have the highest chance of finding him packs that in any other times of the year!

Bellow you can see the first Pro Player card in FUT 14. As in FUT13, EA creates special 95 OVR for real life players that play Ultimate Team. The first to get the honour this year is Southampton’s left midfielder, Jay Rodriguez.

Unlike last year, the card is untradable and the quicksell price is 0.

Tevez, Fernandinho and James Rodriguez are striking out in the new Team of the Week:

These IN-Form players will be available in packs from 18th December 6:00PM – 5:30PM 25th December. You can view this team in the Web App or more detailed at FUTHead.

Be sure to check out the next FIFA 14 tips and articles:

And also check out the official best goals of the week from EA Sports: