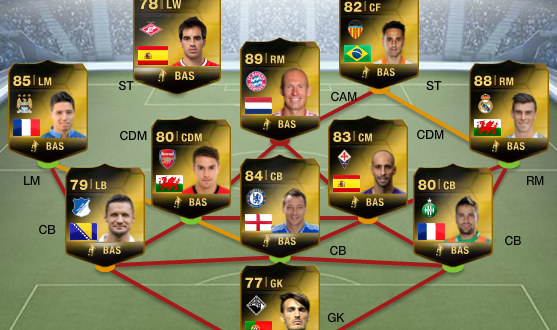 The FIFA World Cup 2014 game it’s on its way according to the Brazilian commentator Tiago Leifert who recently posted on his twitter a picture saying:

The EASFC app is finally available on Windows Phone devices! You can get it for free here and access the next features with it:

• Keep up to date with your Friends and Send Messages

• Purchase Packs from the FUT Store

• Manage your FUT Squads by optimizing Chemistry, Formations, and Players

• Find and Bid on Players on the FUT Transfer Market

• Turn a quick profit with the FUT Transfer List

The 4th episode of the FIFA 14 Next Gen Producer Series is out and the producers talk about Pro Instincts:

EA published an interesting infographic on their FB page about ” How The World Plays FIFA 14 “:

As you can see the most popular club in FIFA 14 is Real Madrid and the top goal scorer is Cristiano Ronaldo.

The 2014 World Cup ball ” Brazuca” is now available in the EASFC Catalogue for Xbox and PS users!

These IN-Form players will be available in packs from 4th December 6:00PM – 5:30PM 11th December. You can view this team in the Web App or more detailed at FUTHead.

In the latest episode of The Boot Room, Matt Cuttle and Darren Cross from Match Magazine discuss the effects of dribbling on the Xbox One.

After last week’s FUT Legends Special, EA released the first FIFA 14 Best Goals of the Week on PS4 and Xbox One:

That’s it for this week too!