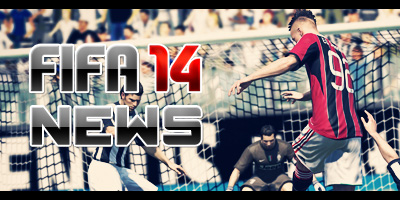 We have lots of FIFA 14 news for you today! The new FIFA 14 trailer is out as well new screens, a new gameplay feature and more all down bellow:

The first FIFA 14 trailer for Xbox 360, PS3 and PC has been released earlier today! Remember that this is the current gen trailer! The Next Gen trailer for Xbox One and PS4 will be revealed in the months ahead!

Also 8 new screens have been released with the new trailer:

A new gameplay feature has also been revealed called Precision Movement that recreates the dynamic movement of real-world players! For more details about this feature please check here!

Bellow we have two video interviews of FIFA 14 Current gen Producer, Sebastian Enrique who talks about all the new FIFA 14 features:

And here we have more impressions and reviews of the current gen FIFA 14:

The last thing we have for you is the second official soundtrack of FIFA 14! Ki:Theory will feature in the FIFA 14 soundtracks list with the song Kitty Hawk! The song is available for FREE DOWNLOAD at http://KiTheory.com!