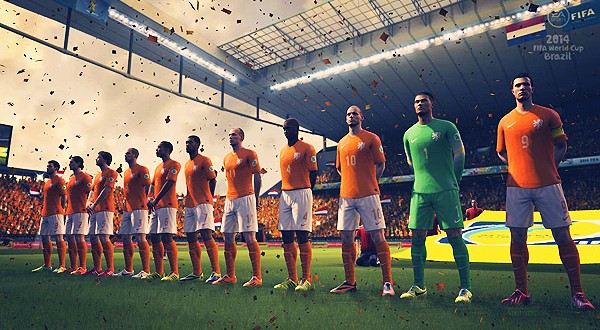 There were lots of news released this week about the 2014 FIFA World Cup game but they couldn’t fit in the usual FIFA 14 News post, so we’ve decided to dedicate a full news post to the upcoming EA Sports game.

The first news that we have are the game features! Although we’ve already posted them in one of our previous FIFA 14 news posts, you can check them again fully detailed down bellow:

–          Response Dribbling – Turn quicker at every angle and keep the ball under control. Using the left trigger, fans will find success beating opponents at slow speeds with the new dribbling system.  Plus, use all-new new flicks, dribbles, and a new Brazilian-inspired skill move to beat defenders.

–          Pinpoint Passing – Key passing improvements and new animations result in crisper, more accurate, direct, and responsive passing. Ground crosses, outside of the foot curling crosses, and personality given to clearances make moving the ball more satisfying and precise than ever.

* This feature is only available in English builds of the game

Stadiums – 21 new stadiums, including all 12 authentic stadiums in Brazil.

EA Sports published 13 new screens of the game on their facebook page this week and we have all of them bellow together with the first 8 images that were released 3 weeks ago:

Also the official game cover was published by EA Sports on their facebook page:

If you pre-order the Champions Edition all 4 offers will be included in the game!

Moreover, the game achievements have been leaked thanks to xboxachievements.com:

As most of you might know the 2014 World Cup Game will be released only on Xbox 360 and PS3 consoles! PS4, Xbox One and PC users won’t be able to enjoy the game. When asked why wasn’t the game made for Next Gen and PC platforms too, producer Matt Prior said:

“We have a limited number of dev resources that we can put towards the World Cup game, and for us to do that properly and get it to as many people as we could in a feature rich version means we stick to the Xbox 360 and PS3. They’re by far the most popular consoles right now. Over time that will change, but right now their global penetration is way more than Gen 4.”
However the producer stated that there will be some World Cup content around Ultimate Team for the Next Gen consoles that will be announced soon. Unfortunately the reason for no World Cup game or content on PC is still unknown.
Source: BT.com
Here we have some video interviews with the 2014 World Cup game producer, Matt Prior, plus some gameplay scenes from the official game trailer that will be revealed later this month:

You can check more interviews and previews regarding the 2014 World Cup game bellow:

Remember that the game will hit store shelves on April 15th in North America and April 17th in Europe and it will be available only on Xbox 360 and PS3!