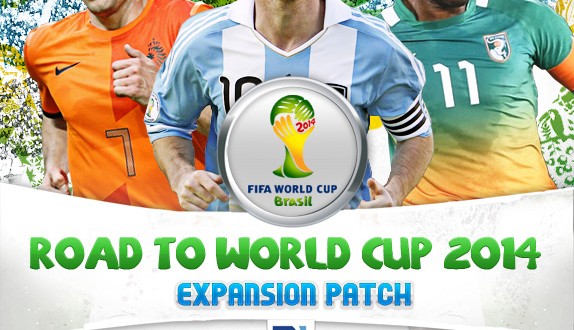 The much awaited RTWC 2014 patch update is finally here! Check all the new features of this amazing expansion patch:

This is a TOURNAMENT Patch and career mode won’t be available to play with! All club leagues and teams have been removed!

This patch is basically a whole NEW GAME and that’s why you will need a duplicate FIFA 13 to install this patch in order to avoid problems with your main FIFA 13 game:
How to have multiple FIFA 13’s installed on the same HDD

You may experience a crash when selecting the 3rd kick taker on freekicks!

If you have the switcher already installed please go to …FIFA 13\RTWC2014\modes folder and delete the Tournaments folder! All the data is on one set of compdata tables and you NO LONGER need to switch!

If you have Origin you’ll need to make sure you have the new official update before installing the patch!

Update V.1.0
– Fixed the next nationals formations because they crashed when playing with them: Mali, Bahamas, Bermuda, Suriname, Trinidad & Tobago, Curacao & Cyprus
– Fixed more kit numbers and fonts assignments!
– Updated players team numbers for some teams.
Update V.1.1
– Fixed the starting 11 formations for most of the teams.
– Added missing Captains and Free Kick takers for some teams.
– Update V.1.0 is already included in the 1.1 version!
Update V.1.2
– New Kits
– Several missing players added to teams.
– More lineups fixed.
– Some player stats fixed.
– Bench Players with realistic sweat suits added for default International teams.
– No more free kick bug, its been tested and confirmed as 100% fixed.
– Update 1.0 and 1.1 are included in this update!

You must regenerate after applying the update!

NOTE: You will need to start a new tournament after you apply this update!

You must read the “READ ME” file to install the patch correctly!