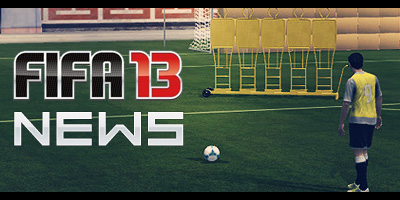 We have many new details to share with you today!Lots of new features,screens,videos and many more have been released the past days!So sit back,relax and read the latest FIFA 13 news:

Firstly let’s talk about the biggest feature/improvement of FIFA 13.The career mode!Now you will be able to Compete for club and country in an expanded Career Mode that now includes internationals.

Play for or manage your favorite national team, competing in friendlies, qualifiers and major international tournaments. Play as manager and secure an offer to coach any national team, with bigger decisions and more pressure. Compete as a player and prove yourself at the club level to attract national team attention and the call to play for your country.

At the club level, new Transfer logic adds a multitude of new factors that shape a player’s true market value. Form, performance, and morale influence a player’s base value to begin negotiations that now include counter offers, player and cash transactions, and squad roles. Player loans, Board interactions and mid-season manager firings add to the drama. Plus, unlock new features like Edit Player or Rematch in the EA SPORTS Football Club Catalogue.

Here is a full list of the new Career Mode features:

Thanks to FSB for the list!Here you read a full preview of the new career mode and bellow you can view some screens of the FIFA 13 Career Mode:

FIFA 13 will have a brand new mode called,Skill Games!Now you can learn or master the fundamental skills necessary to compete at FIFA 13 in a competitive and addictive new mode. Become a better player, faster, no matter what your skill level. Compete against yourself or friends in 32 mini-games, perfecting skills such as passing, dribbling, shooting, crossing and more. Hit targets, loft balls into cans and dribble through obstacle courses, collecting points and beating the clock as you progress through three levels to the Skills Challenge. You can also earn achievements, trophies, and XP while securing a global ranking and perfecting your skills.For a more complete preview please check out FSB’s article and the screens down bellow:

GameInformer also released a detailed article with the new features!You can check it out here!

Yesterday the producer Santiago Jaramillo answered some questions on twitter regarding FIFA 13 and here are his answers:

– As a real or created player (VP), you can get called for your national team matches (friendlies, qualifications)
– There are 50 nations playable in career mode
– You can get fired at any time but you can get other job offers in mid-season.
– You can now go on loan and transfer your pro at any time.
– Many international tournaments will be available in career mode as the World Championships, European Championships, Confederations Cup,South American Cup, qualifying and friendly matches
– You can accept an offer to manage a national team in addition to manage your club. As Manager, you start with a club. then, depending on where it is and how you manage it, you’ll get offers from national teams.
– You can now request additional transfer funds to your board but you must undertake to fulfill higher goals!
– Venezuela and Colombia are in FIFA 13
– Canada won’t be in FIFA 13
– You can buy lots of things on the EASFC catalog with XP like: Re-match Option, change the appearance of players. All these things are unlockable for the entire game and not just the career mode
– You can choose the time of kickoff and we also added dynamic lighting in several stages so you will notice the difference
– Better and more varied cup celebrations
-You can’t select the teams with which you want to play friendlies in pre-season.

For the PC version of FIFA 13 we have the next features confirmed:

In other news,we have the official french cover that features Messi and Real Madrid striker,Karim Benzema!Also other two new covers were released featuring O.Lyon and O.Marseille in their Ultimate Collectors Edition format:

Credits to FIFAKulte for the covers!

After Valencia’s partenership with EA Sports,another team has confirmed their partnership with the biggest video game company in the world!Tottenham Hotspur is officialy the 8th Premier League team to become an EA Sports partner!The other club partners are Arsenal, Aston Villa, Chelsea, Everton, Fulham, Newcastle, and Manchester City.

Another great news is that FIFA 13 has been oficially confirmed on PSVita by Sony!EA SPORTS FIFA Soccer 13 on PS Vita will give you the same physics-based, data driven technology that powers FIFA gameplay on PlayStation®3. You can take part in eight different game modes, including 11 vs. 11, Tournament Mode with over 50 real-world competitions, a full in-depth Career Mode, and head-to-head online. Innovations that utilize a rear touch pad and touchscreen create an intelligent and unique gameplay experience. Rear touch pad shooting delivers pin-point accuracy and removes the element of “hit and hope” from shooting and touchscreen passing opens up the field of play for more creative and precision passing.

In the next video, producer Jan Jarvis will show you how Kinnect works with FIFA 13:

The FIFA 13 iOS version also got new features and improvements like:

Recently, FIFA 12 was optimized for IOS5, the new version will include better graphics with many details visible as the crowd, stadiums, players and weather.

Now with two fingers you can slide horizontally to switch from offensive to defensive.

There will be a new button skill!The movements will be easier to perform. No need to press two times on the screen to make a U turn for example.

Interfaces have undergone a facelift for display as training and part of the menu.

Users of the IOS version will benefit from automatic updates of player stats.

In the next screen you can view the FIFA 13 Menu:

We end this long post with the second official soundtrack of FIFA 13: Passion Pit – I’ll Be Alright