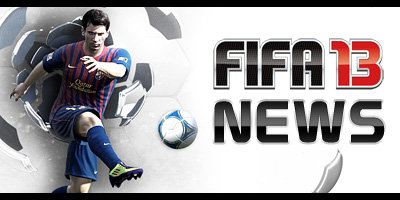 We’ve returned today with new details,screens and videos regarding FIFA 13.Check out the latest news down bellow:

Last week,EA Sports confirmed to us that FIFA 13 will have three new commentators for the Latin American version!The new commentators are Fernando Palomo, Mario Kempes and Ciro Procuna!You can see them in the next video recording their comments for FIFA 13:

The commentators will be available in the Latin American version of FIFA 13 that will be distributed in Argentina, Colombia, Mexico, Chile, Venezuela and Panama.

Bellow you can view three new screens of the FIFA 13 iOS version:

For the online system,FIFA 13 will have three new features/improvements:

– New Live Season: The weekly updates of Live Season will get improved and will have new add ons to make it more realistic like: rankings, injuries, suspensions, transfers and loans.
– Head-to-Head: The popular online mode will have a new system of divisions where you can unlock trophies and XP points in case of victories. With this new improved feature you will be able to choose your opponents according to their geographical location!Another important thing is that your tactics and formations will now be recorded and you will no longer be forced to redo your tactics between each match!
– Facebook: The famous social network will be integrated in the FIFA 13 Online System and you will be able to post comments and results directly on your Timeline.
Source: FIFAGamersBlog

Here we’ve got another set of screens,but this time the screens are from the console version of FIFA 13:

Also a new trailer was released a few days ago featuring Arsenal and their new away kits:

If you look carefully at 0:11 you will see that the boots will have specific 3D models for each boot design in FIFA 13!Thanks to Green Ape for spotting that out!

Except the new 3D boot models more graphic improvements were made by EA Sports the past month!Thanks to Abdiel Haz (FIFA Database Editor) from EA Sports Mexico,who confirmed that LOSC Lille, O.Lyon, Inter Milan, Napoli, Malaga, Tottenham, Liverpool, Santos, River Plate, NY Red Bull and LA Galaxy will have players with realistic faces in FIFA 13!Beside those teams there will be another team that will get specific faces!Valencia confirmed a two-year partnership with EA Sports and their players will get realistic faces for the next two FIFA series (2013 & 2014)!

Next we have two nice articles about FIFA 13 from CGV and TheVerge:

– ‘FIFA 13’ and the unforeseen consequences of altering connected systems (TheVerge)

If you are from Germany and still didn’t order your FIFA 13 copy then you might want to get the special FIFA 13 Ultimate Steelbook Edition from Amazon for 79,99 €!

We end this post with a very interesting interview of the FIFA 13 Gameplay Producer,Aaron McHardy,that talks about the famous “Momentum” in FIFA!You can listen the interview here.Courtesy to the guys from FSB for the interview!

One more thing guys!There have been lots of rumors in the past week about the Street Mode in FIFA 13.We can confirm that the Street Mode will be available for FIFA 13 but ONLY for the 3DS version!No Console or PC!