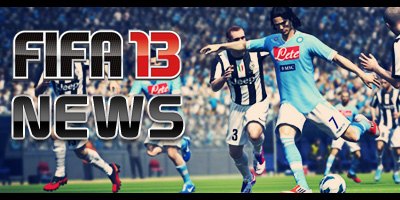 Down bellow you can find the latest news regarding FIFA 13!

As you already know EA Sports released a patch last week that fixed some of the bugs and issues in FIFA 13. PC users already got it and the console users were scheduled to get it last weekend but unfortunately they still need to wait for it after the dev team encountered some problems with the patch and had to delay the release for a few more days. Here are their official statement:

“We apologize for a delay in the FIFA 13 Title Update. A knock-on issue was detected in the patch planned for this weekend. We’re working with our partners to establish a new schedule for the update and we will provide information as soon as it becomes available.”

In the next clip, FIFA 13 producer Santiago Jaramillo speaks about the Internationals in Career Mode:

A great surprise came from Republic of Ireland were EA Sports revealed the official FIFA 13 cover for League of Ireland featuring Cork City FC’s Davin O’Neill and Mark Quigley from Sligo Rovers. This come as a surprise because countries like Germany,Portugal or Russia still didn’t get their league official cover:

You can download the custom cover for your FIFA 13 PS3/Xbox copy here.

Nick Channon,FIFA 13 line producer, talks about the complete dribbling in FIFA 13 and explains how this new feature work:

Team of the Week 4 has been revealed on UT13. These were the best in-form players from 3rd October to 10th October:

And as usual here are the best FIFA 13 articles of the week:

– FIFA 13: 7 Small Details EA Got Right And 3 They Got Wrong (WhatCulture)