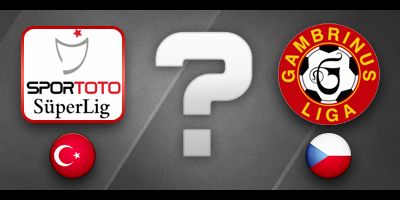 After the last actions taken by UEFA against the corruption in the Turkish League and the higher costs of the licenses for the Czech league,EA may not feature these 2 leagues and their national teams in the future release of FIFA 12.

The corruption sport scandal that took place in the Turkey this month may affect their football league presence in the future title of FIFA since many teams from the first league we’re involved in the scandal.After UEFA decided to ban Fenerbahce from this year european competitions,the rumor about not having the turkish league in FIFA 12 may come true.One thing for sure that we know is that the new president of the Super Lig have decided to remove all the teams from any simulating games until the scandal comes to an end,that includes FIFA 12 and PES 2012 as well!For now EA is trying to renegotiate the licenses again with each team from the Super Lig!In case they wont make it(because it takes time to discuss and sign the lincenses contracts),it will be more than sure that we will have no Turkish League in FIFA 12!But if they make it,we may have something similar to the Brazilian League,where some teams are unlicensed but the league is there!Let’s hope for that!

On the other side,the Gambrinus Liga (Czech League) license was more expensive this year and EA couldn’t arrive to an agreement with the Czech Football Federation for now!It looks like the czech officials have asked the double price for their licenses (league & national team) unlike the previous years!In fact this was a big surprise for EA since FIFA is very popular and well sold in Czech Republic because the piracy rate is very low there.EA is still trying to negotiate the licenses since the league and the national team is already in FIFA 12!We still have 1 month until the full release of FIFA 12 so let’s hope they will reach an agreement because it’s a pitty to lose a league like the czech one!

One team that we wont see for sure in FIFA 12 is the national football team of Wales!Yes,Wales won’t be available on FIFA 12 and that was confirmed by Keith Hennessey, publicist for EA speaking studio who said:

“Unfortunately the Welsh national team will not be in Fifa 12.

“The inclusion of national teams is negotiated between EA and each national football association, which we need to license with individually.

“Licensing teams and leagues is a business decision based on market size and limited resources.

“Including Wales is something we would certainly look at in the future.”

Even if EA is losing licenses they dont just stand and watch,we have heard some “rumors” about new teams and maybe a new league to be added in FIFA 12 but nothing can be confirmed at the moment!

So fans what do you think about this?Will the Turkish & Czech league be removed in FIFA 12?