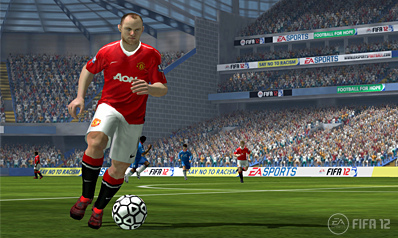 EA announced today that FIFA 12 will be released on the Nintendo 3DS!Here are the main features that the 3DS version will contain:

FIFA 12 on Nintendo 3DS will feature over 500 officially licensed clubs, new touch screen controls that will change the gameplay experience, and the first ever 3D Street Football. With 8 different game modes, it is the largest feature set ever developed by EA SPORTS for a hand-held football game.

Take to the pitch with superstars like Real Madrid’s Kaká and Manchester United’s Wayne Rooney, and become a true marksman using all-new optional touch screen controls.  Enjoy precision shooting by picking a spot precisely from the player’s viewpoint using the lower touch screen and then finessing a shot with pinpoint accuracy. Utilize touch screen controls on set pieces to draw a shot that curves the ball around, or even power it over the wall for the match-winning goal that lifts your club to victory.
“We challenged our development team to develop innovative features that would maximize the FIFA experience on 3DS. They delivered intuitive new touch screen controls and a curved pitch in our Street mode that truly brings the 3D elements to life,” said Matt Prior, Producer for FIFA 12 on Nintendo 3DS. “When you combine these features and many other innovations with all the authentic players and kits for the upcoming season, we are confident that this will be the best football game available on Nintendo 3DS.“ 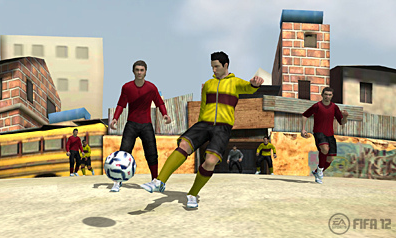 Whether fans choose to take to the pitch as a real-world superstar or re-create themselves in the first-ever 3D Street Football Mode, the environment will come alive through an innovative curved pitch and unique lower camera view that maximizes 3D planes, enabling gamers to experience the depth of the field and player movement with full 3D effects. Featuring players wearing the latest street gear, the stage will be set for epic 5 versus 5 matches in exotic street locales and indoor environments that are true to the spirit of street football. Plus, in Be A Pro Mode, fans will be able to take their created player on a journey from the streets to ultimately compete for their favourite club and national side and become the next football legend.

FIFA 12 on Nintendo 3DS will feature fully authentic 11 versus 11 gameplay, head-to-head online matches using Nintendo® Wi-Fi Connection, Tournament Mode with over 50 real-world competitions, a full in-depth Career Mode that enables gamers to play or manage their way to glory, 3D Street Football, Be A Pro and a Training Mode. It also features nine different camera angles to choose from for the perfect view of the pitch.

FIFA 12 will be available in stores world-wide this autumn for Nintendo 3DS and is being developed by EA SPORTS at EA Canada in Burnaby, B.C. The game has not yet been rated.

So what you think fans? Would you like to see the Street Football Mode in PC’s or Consoles version for FIFA 12?